THE SKY OF POPPIES- A Month to Installation

23 May 2016 by Charron Pugsley-Hill Art, Commissions, QUEENSGATE THE SKY OF POPPIES, World War I No Comments

Today it is a month until the SKY OF POPPIES is installed overnight in Queensgate Shopping Centre on the 23rd June.THIS DATE HAS NOW CHANGED TO THE 6TH JULY 10AM!!! It feels like a lot of time but then it feels too close as there is still much to complete.

Firstly we need to complete 1000 hand made felted poppies of which we currently have 730. We will exceed our target of 1000. The other elements of the installation are partly created! But this will get done as I meet deadlines. I am relaxed right now about those as we continue the programme of workshops and I continue working in my studio on the various elements. 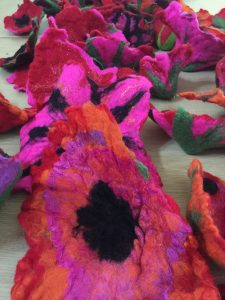 The installation process is the one thing that potentially could keep me awake. Not the actual installation (because I have been promised the professionals -it won’tt be me hanging from a pole!!!) but the thought of the art inside my head becoming reality in the intended space. Will I be happy that I have created the vision in my head? Will others like what we have created? Will they understand and respect what we have created? Will it be a fitting tribute to commemorate the battle of the Somme? Those questions I will know the answer to in a months time.

It has been an amazing process in so many ways but for me primarily it is the people that make or break a project-those I work with to create the actual project and those that are engaged on different levels with the installation, the stories and the process of creation itself. Working with Eve Marshall Artisan Felter has always been a pleasure as we learn new skills together whilst creating new work engaging people in the process. Eve also gave me the amazing teapot made by a friend of hers as a reminder of the project!! Following a trip to the Somme in April I painted THE SOMME POPPIES shown below. 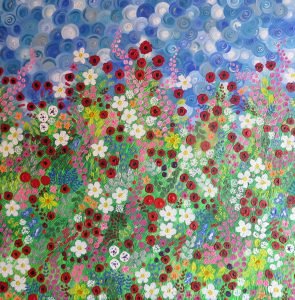 There have been so many precious moments throughout the project. Mostly around all the people, hearing their stories, seeing them creating their own poppies for an event close to their hearts, meeting a lady aged 101 whose husband had lied to get into the army and was gassed at the Somme, 3 brothers who died locally in WWI, laying poppies on some of the graves of the Peterborough soldiers who died in the battle of the Somme,guessing the heights involved and completely failing to guess anywhere near, seeing new friendships being made by people in workshops, telling the stories to those who did not know much about the battle and WWI, bringing people together with those they would not have met,seeing each and every poppy as individual as each person who created them,working with an enthusiastic team from Queensgate( believe me this makes a massive difference to any project!!!), the many photographs I have taken for the wall of fame, the school children playing with the bubbles and popping bubbles in the wrap and seeing all the rinsed poppies drying on my washing line.

For me personally it is an honour and I am humbled by the people taking part, giving up their time to commemorate others from 100 years ago. This is one in a series of work that I am creating to commemorate people, places and events from WWI and so far will be the biggest and will involve the most people. I am excited by the reality of what has been in my head for over a year finally being enabled to take flight and become a real artwork that people will wander around and below and learn more of the stories of that period in time. Meeting so many people from all walks of life who come and trust in Eve and myself to lead them through something they have never done before is a total joy to me. I love that many of those who get involved would never have created something if that project hadn’t been there at that moment in time.

The month cannot come too soon but also can it be further away?……….. 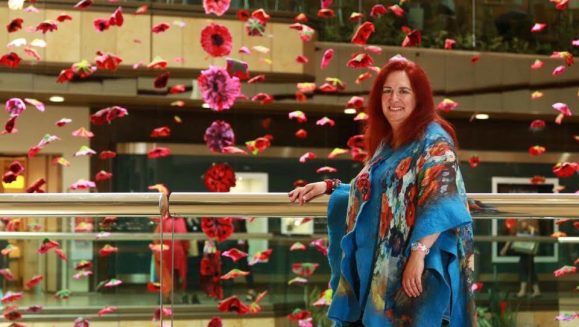