I met my husband 20 years ago in a beer tent whilst we both took part in the first English Heritage multi- period re-enactment event. I was in an English Civil War group and he was an officer in The Great War Society. My introduction to World War began although to be honest it was of no interest at all…except most girls like a man in uniform….The first present he gave me was a pressed poppy from the Somme which he visited just after we met. This was totally of interest  as poppies have always been my favourite flower and I suspect it started a latent interest that only erupted in 2014 with the centenary of the beginning of WWI. I still have that poppy in a frame 20 years on……Little did I know that poppies would be such a massive part of my life 20 years on….

Is it important to you that you know what an artist had in their mind when they create a piece of art or do you like to take your own thoughts, meanings and interpretation to art?

If its the latter then great and do not read on because the following is my thoughts, ideas and creativity that has now been turned into reality and has become THE SKY OF POPPIES. I like that people have their own thoughts when they look at a piece of art because its about your experience and connection with it.How ever I also understand that people like to know what is the inspiration in the creators heart when art is created.

THE SKY OF POPPIES is one of a series of works that I have created to commemorate people, places and events of The Great War a hundred years on. It first became an idea in my mind about a year ago after a conversation with The Royal British Legion nationally, these discussions did not come to fruition however because that crucial person left and which to me means something is just not to be…..and then a friend spoke to the community person in John Lewis Peterborough who had a coffee with the marketing manager of Queensgate who several days later had a conversation with Mark the new Director of Queensgate who commented it would be good to do something to commemorate the Somme……the rest is history as they say………

For me the reality of this work happening in Peterborough where I have lived for over 20 years and that we have been able to involve so many people from all walks of life is very special. When I was a professional wildlife conservationist I truly believed that people were key. If you involve someone in something it becomes real and important to them and the same can be said for art. Too much art is exclusive and hands off…..not the way I want my art to be….So its fabulous that this project has been so inclusive, for the community and by the community. Both Eve and I have thoroughly enjoyed meeting and working with every person who has been involved in this art.It has been very special for us!

A week before the 1st July saw a fierce artillery barrage planned to destroy the enemy trenches so that  when the men went over the top there would be little opposition left to meet them. It was believed by the high command that it would be ‘like a walk in the park’ such was their belief in the shelling that they had ordered. Those in the trenches thought otherwise. The artillery barrage failed mainly because the German trenches had been built 30 foot deep and also because it ended too soon giving time for machine guns to be set up ready for the advance. Carnage followed. The local Willow shells have been made by Renny Antonelli from The Green Backyard to represent the artillery barrage that failed so many men. Nearly 20,000 British dead on the first day, 60% of the officers dead within an hour or so of climbing from the trenches, 1 million casualties on all sides. Each of the 131 tiny poppies on the shells is a man from Peterborough that died at the Somme in 1916 and were made personally by myself as a tribute to them and their families. On a recent trip to the Somme region I placed some felted poppies on the graves of randomly selected Peterborough men. I intend to do the same when I am there again over the centenary weekend. These men were people with real lives and not just names on a cold stone, they deserve to be remembered.

The poppies falling from the sky to the earth and the shells connect. They connect the stories and the reality of the horrors of the battle to these men and to their families who lost them. They connect us to these men who may or may not be our relatives and to our family history. They connect the rain that fell from the sky creating the swathes of mud in which men died to tears that connected communities through their mutual losses. The poppies fall in lines as the men walked forward in lines towards the roar of the machine guns of the enemy lines. The poppies connecting to the shells have been made by the staff at Queensgate and by myself and Eve as we have been the links in this work connecting to the people of Peterborough. 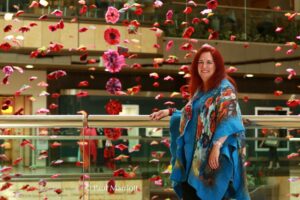 The tower poppies of which there are 3 are from the installation at The Tower of London by artist Paul Cummins. This work of art raised the emotions and tributes of the nation and I will always remember standing in awe at the stunning vision in front of me.The feelings this gave to me inspired me in my own series of work continuing to 2019. Thank you very much to Paul for his permission to use these poppies in THE SKY OF POPPIES. Because of my emotions around his installation they will make this work extra special for me personally but also for the people of Peterborough.

The Lonely anzac poppy connects my work on the story of Sgt Thomas Hunter to the the battle of the Somme in which he was injured and then cutting a long story short died in Peterborough. He is the lonely ANZAC buried in Broadway Cemetery and haunting the museum since his death a hundred years ago. Please see separate blog about his story. 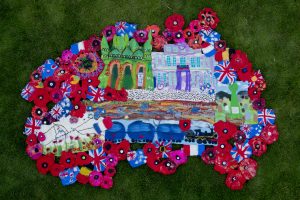 The French have as their symbol of remembrance the beautiful blue,cornflower. The Somme was hard fought over French soil and many french died at the battle too.

Many of the poppies have stunning beads sewn on by some of the women of Peterborough sharing an experience as the women of the time would also have done in knitting circles etc. The beads with their beauty contrast to the harsh devastation of the hail of bullets the men faced when going over the top.

The first poppy is the beginning of the battle where men suddenly became involved in something different- a battle of trench warfare with horrific casualties. Those men who faced and died having walked out of the trenches towards the fearsome noise of the enemy machine guns. 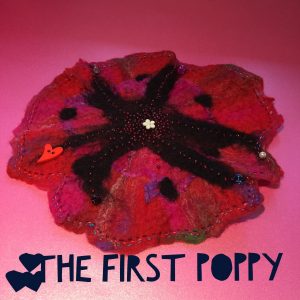 The 1000th poppy represents the end of the casualties as the battle drew to a close on the 18th November 1916. 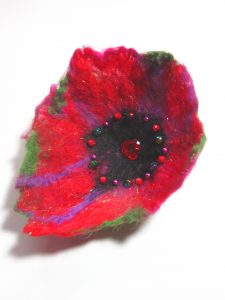 You, The people and families who have come to make your poppies-you are a part of the ongoing history of this amazing country of which we are all a part of. Whatever happens life goes on, and we and nature recover and move on however we can. Our families had to do this a hundred years ago and we will do this and become history as time moves forward.

Your poppy represents not only you and your involvement in the project but it remembers 1000 casualties on all sides at the battle of the Somme. This is not only the dead but also the injured and the captured. These one thousand poppies are a million men, a million men in this one battle alone. Your poppy honours those in your family who may have died in WWI as there are few families in this country and others who were untouched by this savage war. We will remember them! 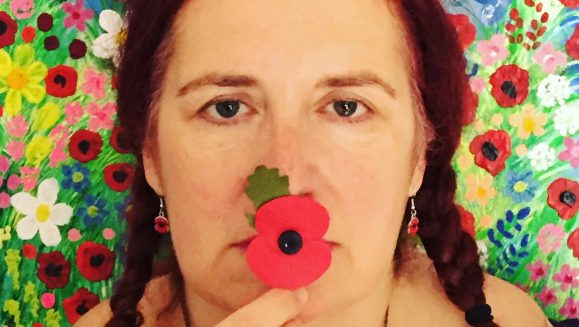 Art Commissions QUEENSGATE THE SKY OF POPPIES World War I

THE SKY OF POPPIES- A Month to Installation